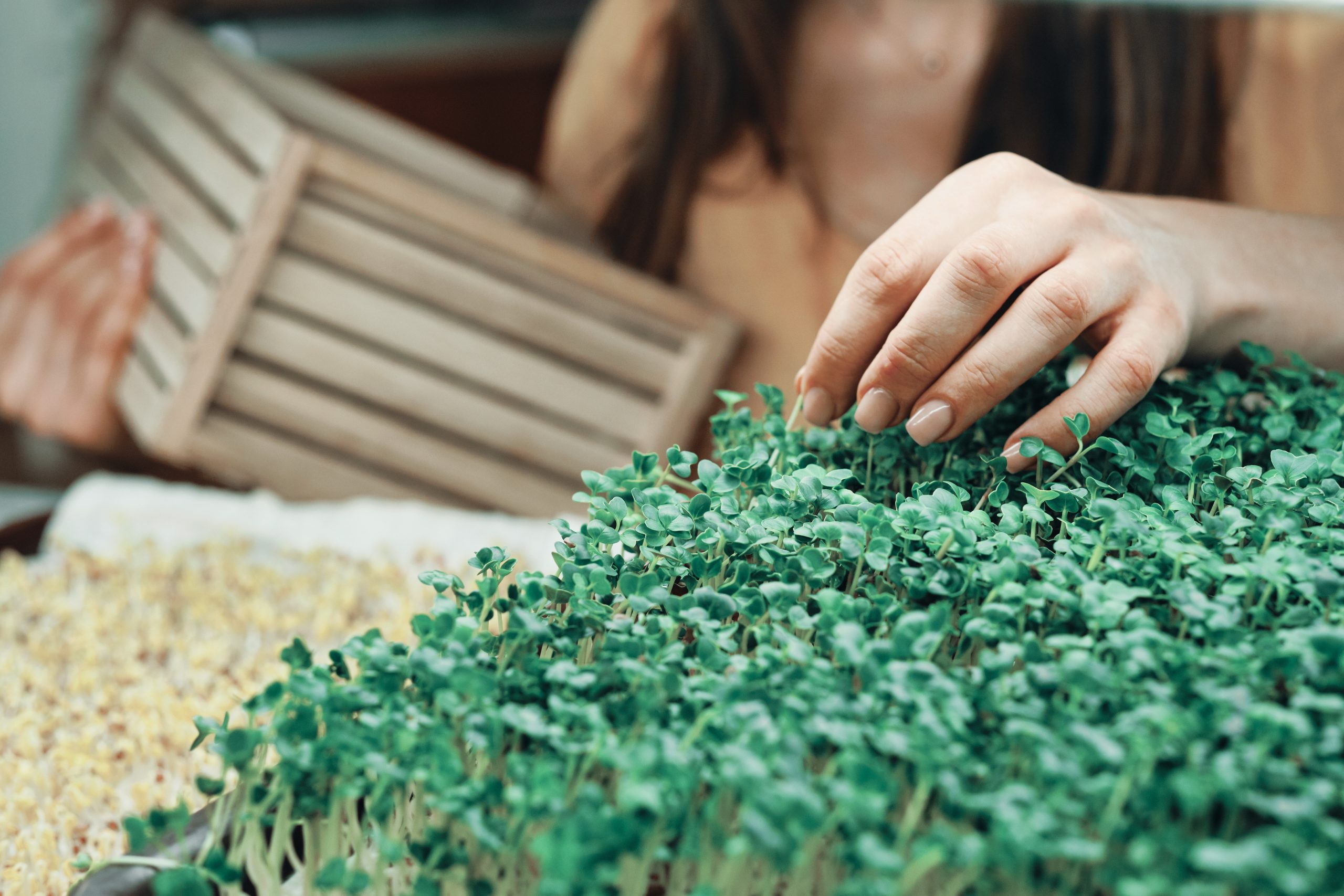 Microgreens are vegetable greens harvested when the first true leaf stage is formed, and only the cutoff shoot is eaten.  They are consumed very soon after sprouting, rather than after the plant has matured to produce multiple leaves. They range in size from 1 to 3 inches, including the stem and leaves.  They are grown in soil, or other nutrient-rich grow medium. The stem is cut just above the soil line during harvesting.  They grow in full sun and are therefore bright-coloured and have minimal risk of disease transmission. 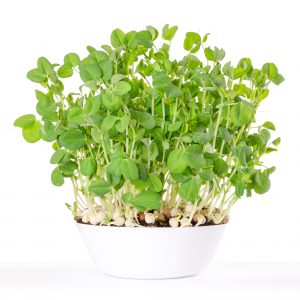 They are used as a nutrition supplement, a visual enhancement, and a flavour enhancement for many people focused on improving nutrition.  Many microgreens combine flavour sensations, such as sweetness and spiciness.  Microgreens are now considered a speciality genre of greens, good for garnishing salads, soups, sandwiches, and plates.

Microgreens are incredibly convenient and packed with nutrients.  You can enjoy them year-round and from just about anywhere.  Because microgreens can be grown indoors, there’s no need to wait for warm weather to grow them.  In the summer, placing the microgreens anywhere with natural sunlight will suffice.  Otherwise, you can use a grow light.

Many people confuse microgreens with sprouts.  They are not the same.

Sprouts are the germinated seeds, and these are eaten as the entire plant, root, seed and shoot.  They are usually harvested within 4 to 6 days.  They have a mild flavour and typically haven’t been exposed to light and therefore are still yellow.  Because of their low light and high humidity growing conditions, there is a higher risk of disease. 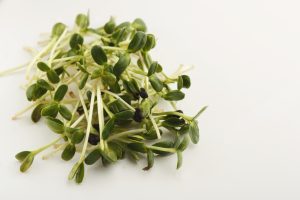 Microgreens can be grown from many different types of seeds.

The most popular varieties are produced using seeds from the following plant families:

Cereals such as rice, oats, wheat, corn and barley, as well as legumes like chickpeas, beans and lentils, are also sometimes grown into microgreens.

Microgreens are much more nutrient-dense than their fully mature counterparts.  This is because they take all of the important vitamins and minerals found in the mature plant and manage to cram them into a much smaller package.

While their nutrient contents vary slightly, most varieties tend to be rich in potassium, iron, zinc, magnesium and copper.  Microgreens are also a great source of beneficial plant compounds like antioxidants.

What’s more, their nutrient content is concentrated, which means that they often contain higher vitamin, mineral and antioxidant levels than the same quantity of mature greens.

Research comparing microgreens to more mature greens reposts that nutrient levels in microgreens can be up to nine times higher than those found in their mature plant counterparts.

A US study looked at nutrient levels of 25 different microgreens and compared them to published information on their full-sized plants.  The microgreens typically had higher concentrations of vitamin C, carotenoids, vitamin K, and vitamin E, than the mature crops.

Research also shows that they contain a wider variety of polyphenols and other antioxidants than their mature counterparts.

This means that including just a few servings of microgreens into your diet alongside plenty of other fruits and vegetables can ensure you’re getting the nutrients you need to maintain optimal health.

Below we are comparing some microgreens and their adult plant counterparts.

Microgreens are a rich source of polyphenols, a class of antioxidants linked to a lower risk of heart disease.  Animal studies show that microgreens may lower triglyceride and bad LDL cholesterol.

Coupled with a balanced diet, healthy lifestyle and regular physical activity, incorporating a serving or two of microgreens into your day could help keep your heart strong and healthy.

Antioxidant-rich foods, including those containing high amounts of polyphenols, may be linked to a lower risk of Alzheimer’s disease.

Learn to love your microgreens — they can help reduce your risk of prostate cancer and cancers that affect the digestive tract.  Powerful antioxidants prevent the buildup of harmful free radicals associated with cancer.  People with inflammation issues may know turmeric and other spices help reduce flare-ups, but a good, colourful and tasty salad with microgreens can help too.

Any medical professional will tell you obesity, and type 2 diabetes go hand in hand. Type 2 diabetes involves insulin resistance. In people with obesity, the cells become less sensitive to insulin released from the pancreas. Glucose remains in the bloodstream instead of being delivered to the cells. Studies show fat cells may be even more resistant to insulin. Many microgreens, including arugula, Brussels sprouts, and kale help fight obesity and encourage weight loss and management. Other microgreens help keep blood sugar levels in check. Antioxidants may help reduce the type of stress that can prevent sugar from properly entering cells.   In lab studies, fenugreek microgreens appeared to enhance cellular sugar uptake by 25-44%.

Antioxidant-rich fruits and vegetables, especially those rich in polyphenols, may lower the risk of various types of cancer.  Polyphenol-rich microgreens may be expected to have similar effects.

How to store them

All vegetables and greens will last longer if you store them properly, and microgreens are no exception.

Maintaining moisture is a key part of keeping your microgreens fresh and crunchy.

One of the best and simplest ways to store them is to put them between damp pieces of paper towels and then seal them in a plastic bag or container.

If you store your microgreens this way, you should expect them to stay good in your refrigerator for up to a week.

It’s best to leave your microgreens in the refrigerator until right up until they need to go on to your plate or into your recipe. That way they won’t start to dry out or wilt before you get to serve them.

Here are some extra tips to make your microgreens last as long as possible.

Microgreens like to be kept cool. Around 36 degrees F (around 2 degrees C.) Normal refrigerators can run at up to 40 F (4.5 C) so you may want to check your settings and turn your fridge down a bit if you’re able to.

2) Keep them out of sunlight

Microgreens love light when they’re still growing. But once you harvest them, it’s best to keep them out of direct sunlight. Exposing some varieties of microgreens to sunlight after they’ve been harvested can alter their taste and appearance.

3) Wash them with care

It’s a good idea for health reasons to wash your microgreens before eating them, just like any vegetable. But microgreens can bruise easily, so they need to be handled with care. You don’t need to drown them. Just lightly rinse them in cold water and then gently run them through a salad spinner to dry them off if you’ve got one. It’s best to wash your microgreens right before you’re going to use them, not before you store them in the refrigerator. Otherwise, hey may have excess moisture and deteriorate more quickly.

Many novice growers enjoy growing microgreens because they are fast, convenient and easy to grow.  All you need is water, soil, seeds and a window with a little sunlight.  Wait time is minimal as these plants are ready to harvest and enjoy just 7 to 14 days after germination, depending on the microgreen.

How to use them

There are many ways to include microgreens in your diet.

They can be incorporated into a variety of dishes, including sandwiches, wraps and salads. Another option is to use them as garnishes on pizzas, soups, omelettes, curries and other warm dishes.

Microgreens may also be blended into smoothies or juiced.  Wheatgrass juice is a popular example of a juiced microgreen. 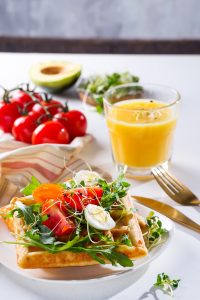 Toss all the salad ingredients together. Shake the dressing ingredients in a lidded jar. Dress, toss, and serve! (Great with a soft-boiled egg)

The Green Dream will score you over 100% of your daily vitamin A and C intake, over half of your necessary calcium, and two grams of dietary fibre. 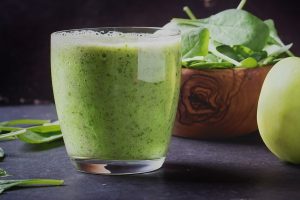 A glass of refreshing green smoothie

At Cultivating Hope Foundation we are starting to grow microgreens.  We are trying out different seeds and testing them for growth time, quality and taste.  If you would like to see what and how we are doing it, please contact us via email at info@cultivatinghope.ca or 1-888-230-7205.